20:39
OSY
By SIMON NIXON
Who knows what ultimately drove Alexandros to commit suicide by hanging himself in a park in Athens? But clearly financial worries exacerbated by Greece's economic crisis weighed heavily on the pensioner's mind. In a farewell note, he set out what he saw as the answer to the country's problems, according to Greek press reports. It wasn't a euro-zone growth agenda, common euro-zone bonds, a banking union, an end to austerity or a more expansive role for the European Central Bank. What Greece needed, he wrote in his despair, was a leader like Margaret Thatcher, "a leader with b—." 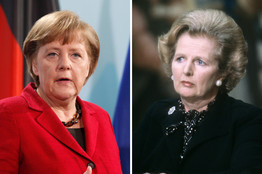 German Chancellor Angela Merkel, left, is at the heart of European matters—as was Margaret Thatcher in the 1980s.

Alexandros understood something important that seems to have eluded a great many politicians and pundits outside the euro zone who have lined up recently to give their views on how to solve the euro crisis. Most of this advice takes one of two forms. One group, largely made up of British euro-skeptic commentators, insists the euro has always been an unworkable disaster and that the only solution is to break up the common currency. The other group, which now sadly includes U.S. President Barack Obama and U.K. Prime Minister David Cameron, insists the euro zone should move to an immediate political and fiscal union.

What both groups share is the belief that Angela Merkel is the villain of the crisis whose inflexibility risks dooming entire nations to a never-ending cycle of misery. This is grotesquely unfair.

Many of those willing the euro zone to fall apart rely on a flawed understanding of European history, politics and economics. They assume the trigger for a euro implosion will be a Greek euro exit, which they believe is inevitable and desirable, much like the collapse of the gold standard. But the euro is not a fixed exchange-rate system like the gold standard; it is Greece's currency. Greece can no more "leave" the euro than the U.K. can leave sterling. Unlike Argentina in 2002, Greece does not have a currency it can independently devalue. Of course, as a sovereign country it is free to introduce a new currency—although this could take months or years to implement—but what will back this new currency? The ability and willingness of the Greek state to collect taxes? Be serious. That is not a currency anybody would want to hold. The idea that investment—or even tourists—would flock to Greece following the financial devastation caused by a euro exit is fanciful. More likely the country would be in political and economic meltdown, soon to be followed by much of the rest of Europe.

Fortunately for Greece, the euro zone differs from the gold standard in other crucial respects. For one, it has a common central bank that automatically transfers reserves between member states, thereby avoiding the modern equivalent of a country running out of gold. That's important because the only reason Greece is likely to exit the euro is if the ECB stops transferring reserves by refusing to continue funding Greek banks. Earlier this month, ECB President Mario Draghi addressed this possibility head on, telling the European Parliament that the ECB would always lend to solvent banks. His message was clear: The euro zone may cut off funding to the Greek government, forcing it to default on its debts and its obligation to its own citizens, but so long as it took steps to ensure Greek banks remain technically solvent, Greece could stay in the euro indefinitely.

But if those advocating a euro breakup are barking up the wrong tree, so too are those arguing for the immediate creation of common euro-zone bonds and a banking union. It is obvious a much deeper political union must be part of the long-term future of the euro zone. Germany knows this and Ms. Merkel herself has said as much. The question is when and under what terms? If Europe's problem was simply one of excessive debt, the current criticism of Ms. Merkel would be justified. But the euro zone's real problem is a crisis of competitiveness, a legacy of decades of entitlements, privileges, overgenerous welfare systems, inefficient bureaucracies, unnecessary and burdensome regulations and high taxes. Ms. Merkel rightly argues that a short-term fix that doesn't address these structural problems would be a grossly irresponsible betrayal not only of German taxpayers, but also of future generations of euro-zone citizens in every country.

Rather than attacking Ms. Merkel, those outside the euro zone who want to play a constructive role should aim their fire at the political elites in member states that continue to block reform. They should demand to know why even now Spain has still not fully restructured and reformed its broken banking system; or why Greece has still barely sacked a single civil servant or privatized a state-owned asset. They might ask what exactly Mario Monti has achieved as prime minister of Italy? Before taking up his post at the ECB, Mr. Draghi set out the reforms he believed Italy needed to restore its competitiveness, but how much of this agenda has been delivered? How many closed professions have been opened up? How many pointless regulations repealed? Why does Italy still have 8,000 administrative regions when the U.S. can get by with only 3,000?

Mr. Monti sometimes acts as if he believes simply not being Silvio Berlusconi automatically gives him the moral authority to demand Germany underwrite Italy's debts while offering very little in return. Now that Spain has been forced to seek a bailout, Mr. Monti's lack of progress is likely to come under increasing market scrutiny.

The tragedy is that Europe has yet to produce a single Margaret Thatcher as a result of its crisis. Ms. Merkel has worked valiantly to give Europe a "Thatcher moment." With hindsight, it is hard to think of much she could have done differently during the crisis, given the obstinate refusal of many euro-zone countries to embrace reform. The logic of the crisis may yet force her to concede further fiscal and political union without the safeguards she seeks. But until then surely the only rational response of anyone who believes in the moral superiority of free markets and transparent governments is to offer her their full-hearted support? That President Obama has chosen to lecture Germany is perhaps less surprising given his own political situation. But Mr. Cameron's decision to follow the U.S. leader down this path is profoundly depressing. If the leader of Mrs. Thatcher's own party is not prepared to speak out against corruption, vested interests, economic inefficiency and closed shops, what hope for Europe?